Algebraic sets in the production theory

Many columns on this webportal discuss the input-output model of Leontief. The characteristics of the Leontief model are the constant returns to scale, labour as a separate production factor, and the absence of coupled production. In fact it is a linear model and thus a special case of the economic theory of capitalist production. In the general theory also non-linear production processes can be described. Then it is convenient to formulate the theory in terms of algebraic sets. The present column aims to integrate the algebraic set in the common Leontief model. The text is based mainly on the book Micro-economic theory van A. Mas-Colell, M.D. Whinston en J.R. Green1.


The production model of Leontief

The open Leontief model consists of a set of vector equations

In the set 1a-b x is the vector of product quantities. When the system contains n different products, then x has n components. The vector y represents the size of the nett- or end-product. The scalar L is the quantity of labour time, which has been expended during the production.

The set 1a-b can be written in the form

In the formula 2a-b Σ is the mathematical symbol for summation, in this case with j=1, ... , n. The symbol δij is the Kronecker delta. This set is suited for an explanation of the algebraic concept of sets in the production theory.

First define the so-called elementary activity j, which belongs to the product j. She is represented by a vector α(j) in the n+1 dimensional space. Its components are

In fact α(j) is simply the j-th column of the matrix I − A, extended by the component aj in the lowest row.

Next define an arbitrary production activity. She is represented by a vector η in the n+1 dimensional space. Its components are ηi = yi for i= 1, ... , n, and ηn+1 = -L. In other words, η is the vector of the nett product, extended by the amount of expended labour in the lowest row. Since labour is consumed, this last component is negative. Together with the sets 2a-b and 3a-b the definition leads to


Characteristics of the production set 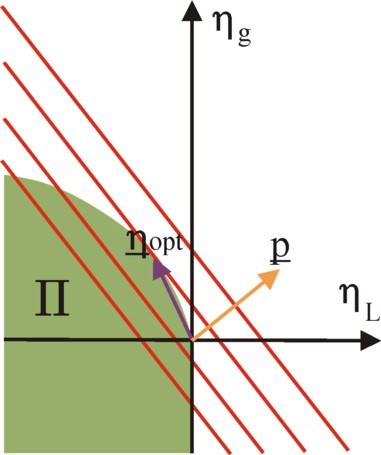 Nevertheless a completely negative vector in possible, in principle. For the sake of convenience the elementary activities are complemented with the so-called disposal activities d(j). These vectors have the value -1 as j-th component, and zero for the other components. That is to say, d(j) = -e(j), where e(j) is the unity vector for the j-axis. A branch j can only generate its product, as long as sufficient production factors are available from the other branches. Production vectors η, which can not be realized by the existing technique, are not part of the set Π. But an excess of production factors can be disposed of by means of the disposal activities.

Perhaps the reader will wonder whether this theory of algebraic sets serves a useful purpose. The advantage is that within this theoretical frame the optimal production vectors can be found. As an illustration the figure 1 shows a set Π for the production of corn. She corresponds to the green area. The corn is both seeds for sowing (a production factor) and end product. A nett product ηg is generated. Besides corn the production process requires only the input of a quantity ηL of labour time. In other words, the production vector is two-dimensional, with components η = [ηL, ηg].

The production method in the agriculture puts boundaries on the harvest, because she corresponds to a certain labour productivity ap. It is obvious that a maximal output of corn is preferred, for a given amount of labour time. Therefore the production vectors on the upper boundary of the set Π are called optimal or efficient2. However, also all vectors below this boundary, in the green area, are possible and are part of Π. Note that the area with positive values of ηL is excluded from Π. It has already been remarked, that ηL must be negative. This is always the case. For the factor labour itself can not be produced (at least in this model). Therefore labour time is called a primary factor3.

The production vector is well suited for the calculation of the profit φ of the producer. Namely, let pj be the market price of the product j. Then the whole price system can be represented by the vector p with components pj (j=1, ... , n) 4. And the profit is given simply by the inner product

In the formula 5 use is made of the fact, that the production factors in η are presented as negative numbers. Note, that the profit depends on the price system. As an illustration in the figure 1 several iso-profit curves are drawn. These are lines, which connect the production vectors with a single and constant profit φ. The angle between the price vector and these lines is rectangular5.

In the formula 6b ε represents the "is an element of" sign. The figure 1 shows immediately, that the vector, which maximizes the profit, is given by the isoprofit line, which is just the tangent of the upper boundary of the set Π. The point of contact is the optimum6.

The advantage of the theory of production sets is that she also holds for production methods, which are not linear. Whereas the Leontief model is merely applicable to the case of constant returns to scale, the theory in the present paragraph is also applicable for positive or negative returns to scale. In other words, the theory can be applied in a broader manner than merely in situations with production vectors that obey the formula 4. The technical coefficients do not have to be constants. At the same time the importance of this advantage must not be exaggerated. For instance the positive scale effects suggest, that the profit can be increased at will be a continuous expansion of the production. But this does not allow for an optimization, which is the aim of the economic theory.


An example with the theory of sets

The production technique is determined by the technical coefficients. The values of those coefficients aij and aj are presented in the columns τ(g1) and τ(m1) of table 1. Moreover the table contains an alternative production method for the agriculture, which is presented in the column τ(g2). Now the set 3a-b can be used in order to transform each of these three methods into an elementary activity. 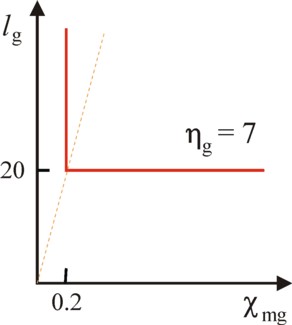 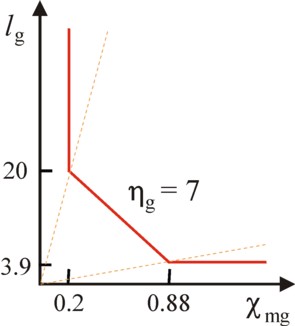 A more interesting case occurs when two elementary activities generate the same product. For instance, suppose that the agriculture can also apply the method τ(g2), with production vector [0.7273, -0.09091, -0.4091]. Also this method can generate a nett product of 7 bales of corn, albeit with a level of activity equal to 9.625 bales of corn. The necessary quantities of production factors are χmg = 0.8750 tons of metal and lg = 3.937 units of labour time.

The figure 3 shows the isoquant for 7 bales of corn after the inclusion of the elementary activity τ(g2). This activity obviously adds the point [0.8740, 3.937] to the isoquant. But because of the formula 4 also all production vectors on the line piece between the two points [0.2, 20] and [0.8740, 3.937] are possible. The situations on this line piece do allow for the substitution of the production factors!

Unfortunately the substitution is useless. Namely, a so-called non-substitution theorem can be proven, which limits the number of efficient production vectors9. According to the theorem, all efficient production vectors in the presented example with two products (bales of corn and tons of metal) can be generated with exactly two elementary activities. There is no need for a third elementary activity, such as in the table 1.

The loyal reader of the Gazette will not really be surprised by the non-substitution theorem. For in a previous column about the neoricardian production theory is has already been explained, that for each wage level pL only one technique has a maximal efficiency. The column, just mentioned, shows for the present example, that the method τ(g2) is more efficient for pL/pg > 0.277, whereas conversely the method τ(g1) is more efficient for pL/pg < 0.277. Merely in the point pL/pg = 0.277 each linear combination of both production methods can be chosen, without negative consequences for the efficiency. Apparently the line piece of the isoquant corresponds with the price vector, which belongs to the switching point of the two techniques.


The input-output table of the branches

This paragraph is an elaboration of the properties of the input-output tables. For the sake of completeness it helps to remind the reader, that the former planned economies in Eastern Europe preferred to use the expression intertwined balances. The formula 4 shows that the elementary activities α(j) form a set of basis vectors, as it were, which can be combined to express all kinds of production plans η. However, when efficient production vectors must be expressed in terms of the α(j), then those particular elementary activities must be selected, which for the given price system p indeed maximize the profit. When an α(j) generates a loss, then she is not eligible. 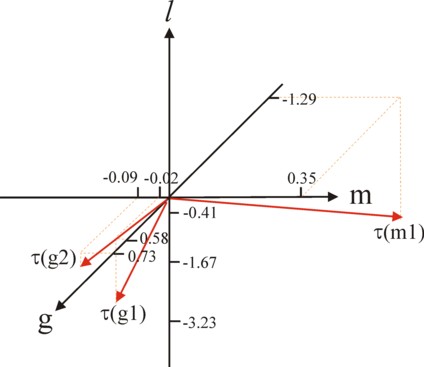 In the figure the three-dimensional crossing of axes is represented by the black lines. The arrows mark the positive part. The quantities of corn and metal are displayed in the horizontal planes. The labour time l is measured on the vertical scale, where naturally only the negative part of the axis has a real meaning. The red vectors correspond to the elementary activities. Dotted lines are used in an attempt to express the spatial perspective of the arrows within the crossings. All three vectors poins downwards. Furthermore, the agricultural activities point in the left-forward direction, whereas the industrial activities point in the right-backward direction.

Finally, it is worth mentioning, that the concept of the elementary activities has a practical meaning. The Russian Leninist economist V.V. Kossov points out in his book Verflechtungs-bilanzierung, that the design of the input-output tables always requires some aggregation of the various branches10. The aggregation prevents the bulging of the tables or matrices, which would impede the performance of calculations. Besides a detailed data collection is often impossible, simply because the empirical data are unavailable.

Next a choice must be made for the branches, which are preferably aggregated in the process of simplification. The aggregation is only meaningful, if the concerned branches have much in common. Apparently a criterion is required for the classification of the branches according to their technical properties. Kossov proposes to aggregate branches, which use approximately the same production factors, in approximately equal proportions. Moreover the end products of the aggregated branches must bear some resemblance. In other words, those elementary activities must preferably be aggregated, which have their vectors pointing in approximately the same direction.

The approach of aggregation, mentioned just now, can be illustrated by means of the example. Two vectors point in approximately the same direction, when their angle θ is small. And θ can be found simply by calculating the inner product of the two vectors11. Thus it is computed that the angle θ between α(g1) and α(g2) is 41.6°, between α(g1) and α(m1) it is 41.5°, and between α(g2) and α(m1) it is 83.2°. Apparently the aggregation of the two productions of corn almost matches the aggregation of τ(g1) in the agriculture and the industry.

This conclusion may surprise, certainly when the figure 4 is considered. The two agricultural activities seem to almost coincide, but the point of view is somewhat misleading. Moreover the scales of the axes are not equidistant. The scales on the axis of corn and especially the scale for the axis of metal are stretched. However, a closer examination reveals that α(g2) has a rather low intensity of labour. Reversely, both the industry and α(g1) in the agriculture are rather labour-intensive. That could indeed be an argument in favour of the aggregation of two seemingly different branches. After such a choice for the closest branches, the practical aggregation is naturally done with the help of the formula 4.