The labour theory of value of Sam de Wolff

E.A. Bakkum is professionally active in the Sociaal Consultatiekantoor, where he holds the position of solicitor.

One of the most important questions in the economic science is the manner in which the product prices are brought about. She determines what the value is, that consumers attach to a certain product. Following Adam Smith and especially David Ricardo, Karl Marx has developed a theory of value, that makes the value of a product entirely dependent on the amount of labour time, which is expended for its production. The (exchange) value of a product is proportional to the amount of invested labour time. A product is a carrier of value, because human labour is accumulated in it1. Although Sam de Wolff has always called himself a marxist, and felt like a marxist, the labour theory of value has not become a squeezing strait-jacket for him. As is already clear from the columns about the conjuncture, De Wolff tries to renovate and advance the marxist theory. He has this urge to improve also with regard to the labour theory of value. In this sense De Wolff is a child of his time. For already in the final days of Karl Marx a new price theory had arisen, which makes the product exchange dependent on the considerations of utility, and not on the amount of needed labour time. The essence of this theory is, that the consumer wants to maximize the utility of his expenses. This idea was already advanced in 1854 by the economist Hermann H. Gossen, but it would take another twenty years before it is worked out into a usable model by the economists William S. Jevons and Léon Walras. The new theory is hostile towards marxism as far as the exploitation of the workers by the producers is denied.

The theory of utility was accepted quickly by the Dutch economists, even those who called themselves marxists. To the knowledge of your columnist only two Dutch marxists have really studied the conflict between the traditional labour theory of value and the theory of utility. This is of course Sam de Wolff, as will be explained further on in this column, and in addition the then quite well-known Rudolph Kuyper2. De Wolff is not really interested in the price formation herself, but mainly in the total size X of the national production. In other words, he tries to determine the factors, which fix the gross national product. He hopes that this information can support and complete his model of the economic conjuncture. Although De Wolff embraces the theory of utility, he still wants to furnish his argument with his own designations for all sorts of economic quantities and phenomena. For instance, he is not very pleased with the word utility and prefers to use the word pleasure (in Dutch lust). This column adopts his designation, in order to preserve the originality of his thinking.

De Wolff states that the acquisition of products is accompanied by a pleasure L. On the other hand the provision of productive labour is accompanied by a displeasure O (in Dutch onlust). The property of a certain amount x of a product yields a pleasure L(x). If a consumer acquires an extra amount Δx of a product, then the accompanying extra pleasure ΔL(x) will decrease progressively. For the human ability to consume has its limits, albeit that this limit is stretchable. Of course the pleasure has a time horizon, so that the need is felt within a certain period. The delay of a consumption to later times is not taken into consideration. In other words, today a consumer may be satiated, but tomorrow the need will return. Tomorrow's need is excluded from the pleasure sensation. In the economic science the amount of utility, that is supplied by the last added unit of product, is called the marginal utility. Due to obscure reasons De Wolff dislikes the concept of the marginal utility3. Therefore he defines his own quantity, which he calls the intensity of pleasure LI. However, its definition coincides with the marginale utility, namely

In the formula 1 x is the amount of product in possession of the consumer, Δx is the additional amount dat he can get, and ΔL is the additional pleasure4. The remark just made about the progression ("become satiated") implies, that the intensity of pleasure diminishes according as x increases. At the end of this column an example will be presented, where the progressive decrease is clearly shown.

The displeasure (called by De Wolff the grief, or effort) of labour is represented by O(t), where t is the duration of the expended labour (in given units, for instance hours, months or years). It is generally assumed, that the displeasure increases in a progressive way, according as the labour time increases. For the workers prefer to enjoy some leisure time for relaxation and recreation. Of course the displeasure O(t) is defined within a given period of time. It makes a clear difference whether for instance five working days are imposed for the period of a week or for the period of a year. It is evident that a worker can never work longer than the time period, which relates to the displeasure. In passing it should be noted, that in the common economic theory the willingness to perform labour is mainly coupled to the wage level. In the following it will become clear, that in the model of De Wolff the wage enters only in an indirect manner. The intensity of displeasure is defined as 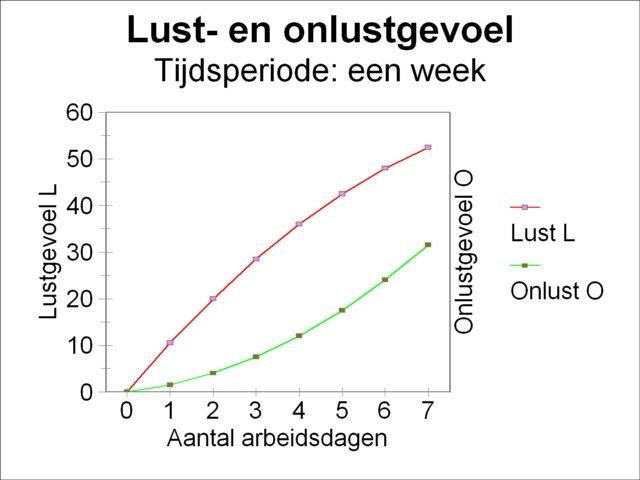 Figure 1: Example of pleasure and displeasure

In the formula 2 t is the duration of the expended labour, Δt is the additional time that the person could work, and ΔO is the additional displeasure of the worker. This shows how the labour time enters in the theory of De Wolff. The intensity of displeasure rises according as t increases (see also the example at the end of this column).

For convenience's sake De Wolff studies a society, consisting of just one person. This is called a Robinsonade, because this single person lives on an island, as it were, just like Robinson Crusoë. In this case the person is both the consumer and the worker (producer). Then this person will have to weigh his pleasure and his displeasure. According as he works longer, his displeasure O(t) increases. At the same time he acquires a larger amount of product in this way, which augments his pleasure L(x). In order to make a quantitative comparison between O and L, both functions must have the same argument. Therefore in the labour theory of value of De Wolff the pleasure L(x) is converted into the corresponding pleasure Lτ(t). This begins with the realization that one unit of product is equal to (the amount of product which is produced in a single unit of labour time) × (the time τ, that is needed to produce one unit of product). Note that τ is the inverse of the labour productivity ap. In other words, τ = 1/ap. Then for a certain quantity of product x one obtains

The second equality defines Lτ. The intensity of pleasure LIτ is given by

Starting from this point, the Robinson-person can calculate exactly the duration t of labour time, which balances his senses of pleasure and displeasure. He will stop his work as soon as his labour produces more displeasure than the extra consumption justifies. In the breaking point the intensities of pleasure and of displeasure must be just equal, that is to say

The formula 5 determines the size X of the production in a society of a single person. For from the equality the total amount of labour time can be calculated. The total size X is obtained by a multiplication with the labour productivity ap. X is just the quantity, that De Wolff tries to derive. Unfortunately the limited practical applicability of the Robinsonade detracts somewhat from the success of the model. The income from capital or from rent is missing. In a society of a single person there is no wage struggle5. 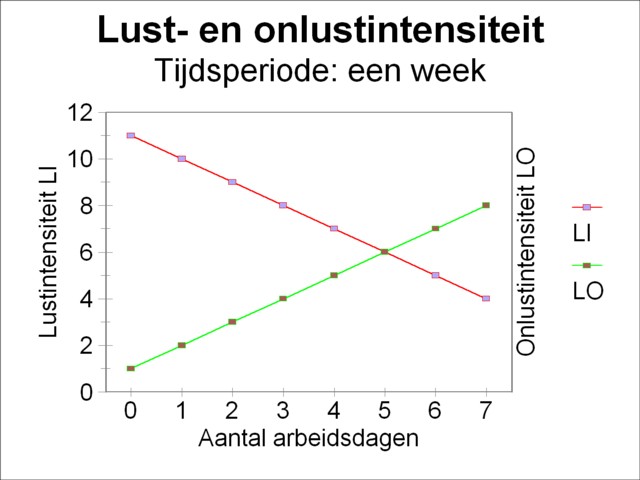 Figure 2: Example of intensities of pleasure and of displeasure

Concrete examples always help to clarify a model, and De Wolff himself persistently uses them. Suppose that the Robinson-person grows corn, in order to provide for his need of bread. The unit of corn production is a sack of corn, and the unit of labour time is a working-day. Assume that the labour productivity of the Robinson-person is given, for instance a quarter of a sack of corn per working-day. The formula 3 shows, that then the pleasure can be expressed in terms of the duration t of labour. Suppose that one has

Further suppose that the displeasure is given by

It has already been observed, that both the functions Lτ and O are defined with respect to a certain period of time. In this example a time period of a week is chosen (that is to say, 7 units of labour time). Both functions are presented in the figure 1. The figure clearly shows, that neither the pleasure nor the displeasure is proportional to the labour time t. This effect has already been found at the beginning of the present column. The pleasure flattens, when the product quantity increases. On the other hand the displeasure of labour continues to grow, when t gets larger. The Robinson-person must calculate from the two functions Lτ and O the intensities, if he wants to calculate his optimal labour time topt by means of the formula 5. Besides he has to decide whether t consists of only working-days (in other words, it is a natural number), or whether t can contain a fraction of a working-day (in other words, t is a rational number)6. For convenience's sake it is assumed here, that the person is willing to work a fraction of a day, if need be. In that case Δt can become arbitrary small, so that the formulas 1 and 2 for the intensities can be interpreted as the derivates to t of respectively the pleasure Lτ and the displeasure O. The result is

Both intensities are shown as graphs in the figure 2. The breaking point is found by substitution of the formulas 8 and 9 in the formula 5. One finds as the result, that the pleasure and displeasure are in balance, when the Robinson-person works during exactly topt=5 days. The same result is obtained by reading in the figure 2, where the point of intersection of the two curves is located. As long as the person works less than 5 days, he will long for extra sacks of corn. As soon as he keeps working after the fifth day, he will dislike the extra labour in relation to the added pleasure of corn. He will have left 2 days of his time period for relaxation. Because of the assumed labour productivity the total amount X of product for the given time period is equal to 1¼ sacks of corn. 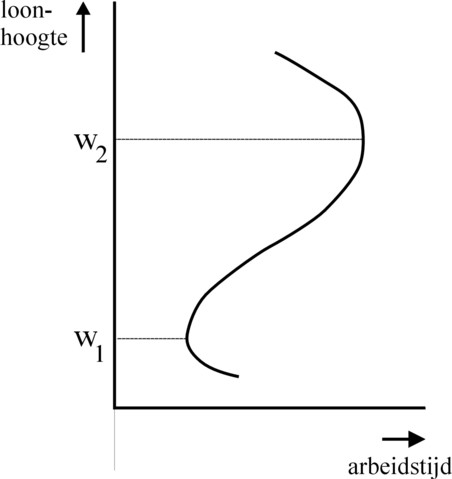